Sadly, this clip never aired. This is a single camera angle; two others doubtless exist, along with who knows how much other great stuff that was taped for that wonderful show.

About this song: the lyrics were ripped from the headlines and processed through our adolescent mentality. Newspapers and TV loved the story about Nancy Jo Burch, who after bloodying a schoolmate with a stick was briefly scheduled to stand trial as an adult. Within about 6 weeks the conflict had evaporated–Nancy Jo’s parents reimbursed the others $20 for doctor’s bills, no trial needed–but if there was any better fodder for an EDB original we never found it.

The lyrics express horror and outrage at all elements of the situation simultaneously—the violent act, the response to it, and the media frenzy—but at the same time end up (only half-ironically) sympathizing with the aggressor. We probably did not fully understood the situation; it seems that it was Nancy Jo’s lawyer who wanted the criminal trial because he thought it had no chance of succeeding, while a juvenile trial might have. Didn’t matter.

Filming for New Wave Theatre was an incredible honor: We all watched it religiously, both when it aired and endlessly on videotapes.  Every “outside” LA band was on the show, regardless of subgenre – punk bands, performance artists, rockabilly… In the years since, I’ve come in touch with many others who grew up in more isolated environs and who found solace in NWT’s broadcast – something like the Voice of America jazz broadcasts into the Soviet Union had for generations earlier.

Watching it now, I’m – of course – horrified by my interaction with Peter Ivers during the interview.  We knew Ivers as the flamboyant host of the show, but having since read his biography, I’m even more embarrassed – it’s clear that we were the poseurs here.  What might not be known to viewers who don’t know the show is the “meaning of life” question: Ivers typically asked the bands, “What’s the meaning of life?”, so we were expecting that to be where the questioning would start.

This clip never made it on the show and, for decades, we didn’t know the clip survived – until 2009, when it led a show about Ivers and New Wave Theater on WFMU.  They couldn’t showcase a more indicative clip of just how weird New Wave Theatre was than EDB… 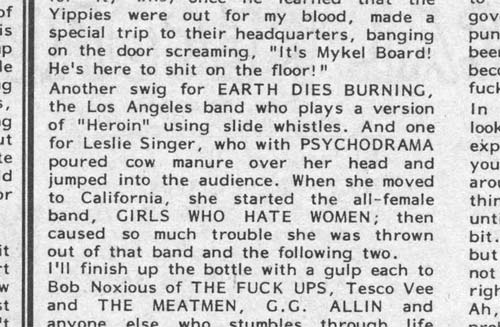 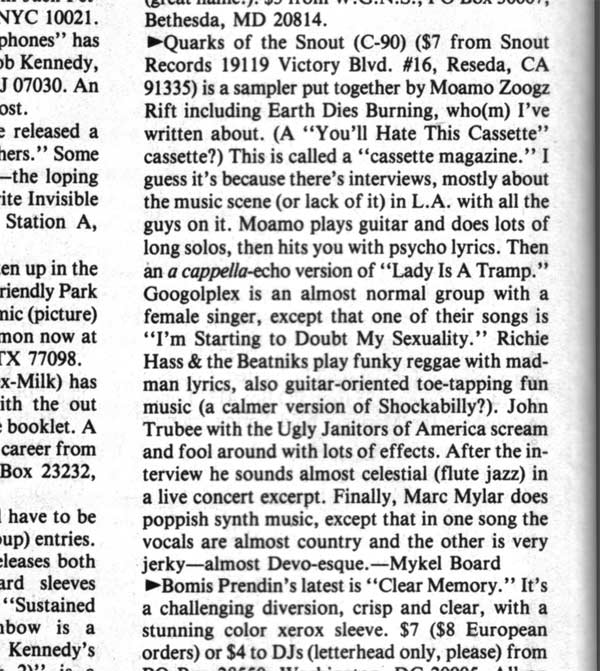 You can look at some of the packaging from Quarks of the Snout and hear the EDB interview. 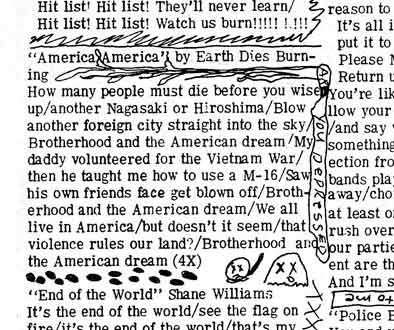 Lyrics to this song were by Ron. We read Flipside fairly regularly, and apparently wanted to see our names in print there. 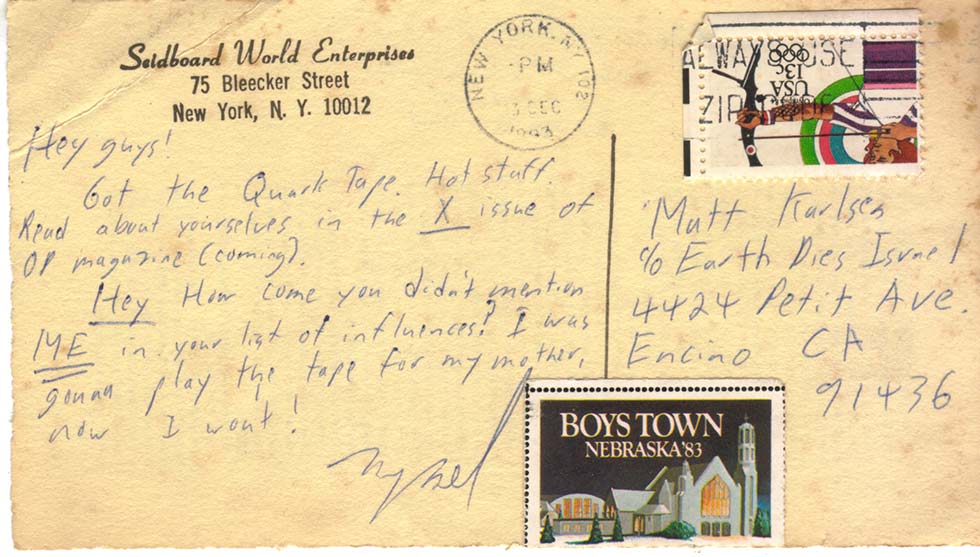 Very likely from 1982, since we stopped performing “America, America” and “Haiti” pretty early. 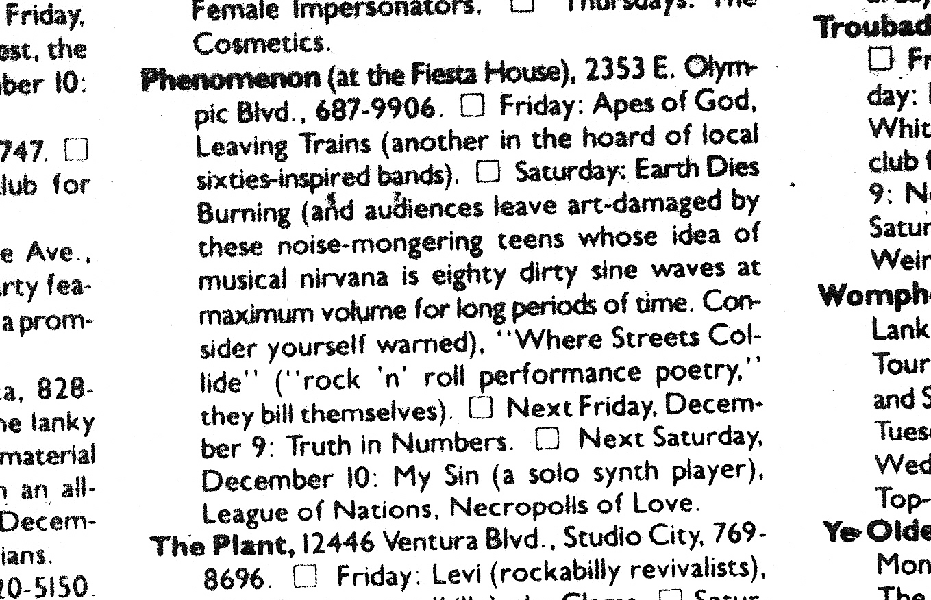 Andrea ‘Enthal, who penned this blurb for the LA Reader, apparently hated us.  Whether she ever actually attended any of our shows is not known. The blurb ran a few times. 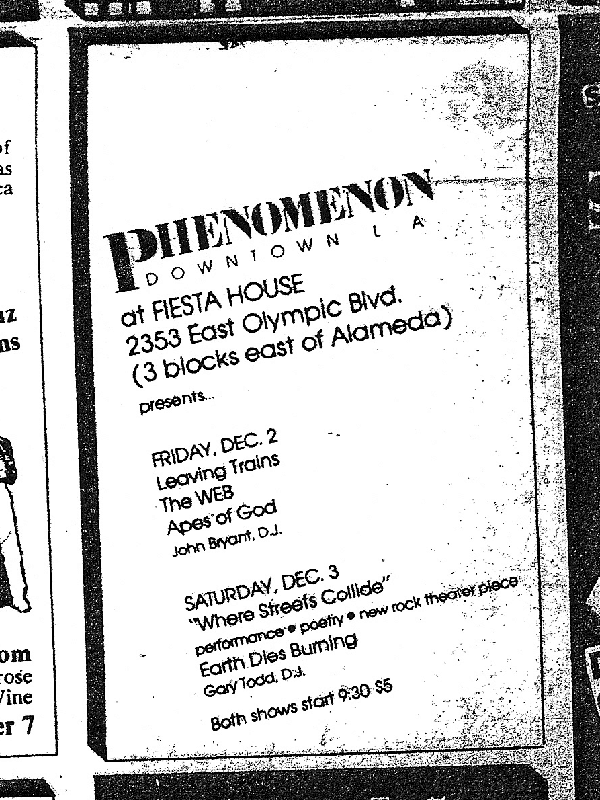 I don’t think Andrea ‘Enthal had much interest in anything EDB – not the noise, nor the sense of humor, nor being teenage boys – but I think that “consider yourself warned” was a pretty reasonable tag.  She had a late night radio show on KPFK that we weren’t welcome at, but I remember hanging out in the dj booth with the show that came on after hers on several occasions.